Published on the LSE Media Policy Project blog on 10, February 2015

With the approaching general election and a new charter due in 2016, the BBC is facing troubling months. “Colossal scrutiny” is expected from politicians, as Director General Tony Hall recently said, and if the Conservatives remain in power, severe cuts in public funding might be introduced. Irrespective of which policies will be implemented, it is worth questioning, however, if reducing the licence fee would align the BBC with the other public broadcasters in Europe. Do UK households pay excessively more for public service broadcasting compared to their European neighbours?

The table below provides a brief comparison among some of the main public service broadcasters (PSBs) in Europe: France Télévisions in France, ARD and ZDF in Germany, and RAI in Italy. Data show that, although differences are small, UK households pay the second highest price in both absolute terms and in percentage of GDP per capita, only after German households. However, the cost of the licence fee has increased less than the inflation rate, especially in the UK, where inflation has doubled compared to the increase of the licence fee from 2008 to 2013. This gap is expected to widen further, since the cost for the licence fee is frozen until 2016.

Other European PSBs permit advertisements, but data reveal that public funding accounts for a substantial share of the total income for each network, exceeding 80 percent in France and Germany. This suggests that leaving room for advertisements cannot easily compensate for eventual cuts in public funding. On the contrary, an additional source of income would be generated by reducing the evasion rate, which is estimated at around 5% in the UK. This figure is already very low – especially compared to Italy, where the licence fee is paid through the same method – but still represents a loss compared to France and Germany, where all households have to pay irrespective of their use of TV devices.

Finally, on the audience side the UK can claim the highest percentage of consumers rating the quality of PSB channels as “very good”. Although cost and quality are not necessarily related, it is striking that the countries which pay less – Italy and France – are also the ones with the lowest satisfaction rate. Cutting the BBC licence fee could therefore be damaging not only in financial terms – even if advertisements were allowed – but also in terms of content. In exchange for a limited economic gain, UK households might end up with an irreparable loss in the quality of the programs they have seen so far.

TV licence fee across Europe
A comparison among some of the main PSBs in Europe (2013 data, latest data available) 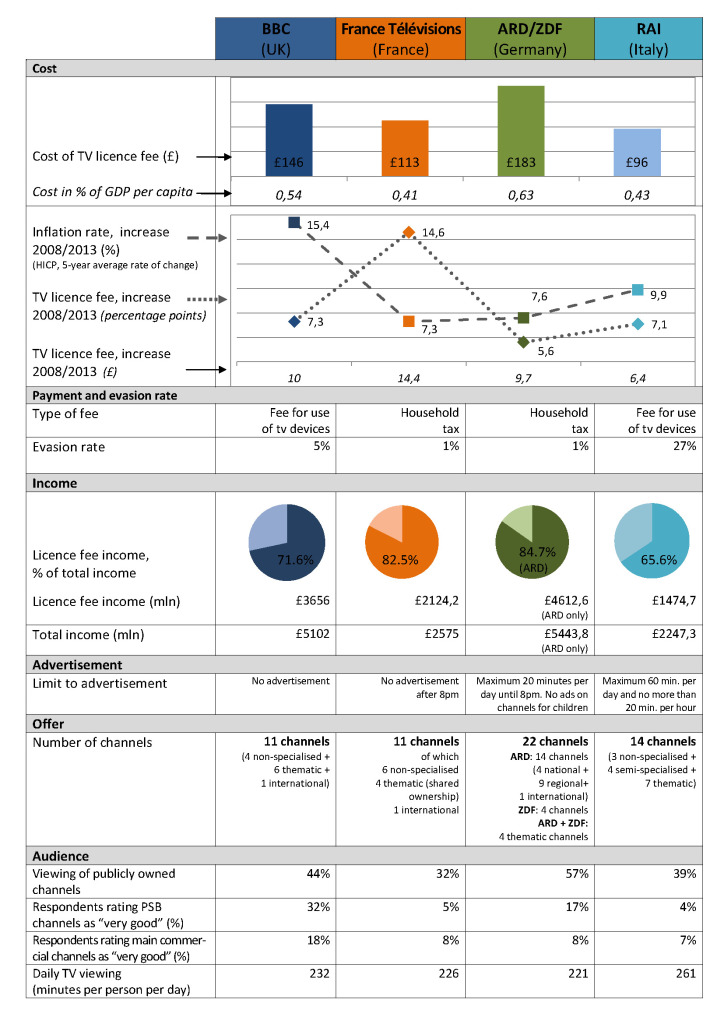 by davide Posted on February 11, 2015
This entry was posted in -(meta) English, Media policy. Bookmark the permalink.